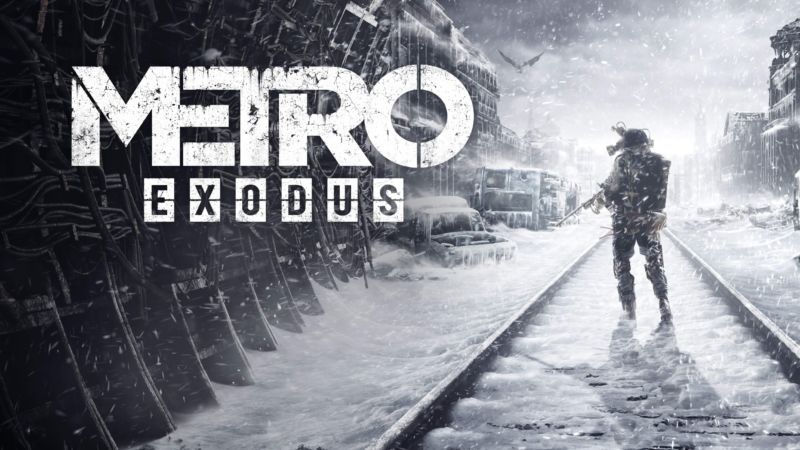 Reading reviews of Metro Exodus, one word keeps popping up time and time again: ambitious. And it is, compared to the last games. It’s massively more ambitious than 2033 and Last Light. That’s understandable, considering they came out nine and six years ago, respectively.

But there’s only so much a review can convey. I didn’t quite understand how ambitious the game was until about an hour into playing. I finally made my way through the tutorials, finally figured out how to turn off the hints and button prompts, and was off into the frozen wastes on my very own train with a ragtag group of fighters. After running into a road block, I jumped off the train to explore and pulled up my map. ‘Oh…’ I mumbled to no one in particular. ‘This is…uh…this is big.’ I knew right away that this wasn’t going to be a linear, story driven narrative like the previous two installments. This was going to me a massive undertaking, one that I couldn’t just pop through in a weekend.

And the more I played through the opening level, the more I realized just how big of an undertaking it would be. There are enemy camps, crafting components, monster nests, bunkers…and half of these you don’t even have to interact with. You can go the whole game avoiding these side missions, sticking to the main quest, and only see a fraction of this massive world.

4A Games obviously put a lot of work into this game, because in a landscape filled with massive open worlds, it takes a lot of little things to make a game stand out.

1) Your boat pushes ice out of the way.

A lot of the time in AAA games, developers don’t bother to program physics into every object. If you look back at early games like Goldeneye and Perfect Dark, you’ll find tons of objects throughout the world that can be pushed, pulled, and interacted with. But that soon feel on the wayside as developers began worrying more about graphics and pushing out games than they did about making their worlds seem full and real.

But in Metro Exodus, you can interact with nearly everything in the world. You can pick up guitars, turn lights on and off, and yes, your boat pushes ice out of the way when it skims past it. It’s something very minute and simple, but it’s a detail that definitely adds to the feeling of realism in the world they’ve created.

2) Spiders crawl on you if you walk through webs.

Just like the last two installments, spider webs are everywhere in Metro Exodus. But arachnophobes need not worry; your trusty lighter is only a button press away. The only thing is…you might not notice the spider webs before it’s too late. As soon as Artyom starts slowing down, you know you’re in trouble. The tiny beasts begin scurrying up and down the webs, and some crawl up your arm, down your chest, and even onto your mask. The first time it happened, I got chills up my spine. I keep an eye out, now…and I keep the contrast really low.

The contrast in Exodus is stark, sometimes too stark, and it causes quite a pain when going through areas without a light source. I ended up having to move the gamma over all the way to the left, almost completely visible, just so I could see where I was going in low-light levels.

There’s a lot of land in Exodus. And when you’ve got a game with that much land, you’re going to need a lot to fill it or else it’ll quickly become quiet, boring, and unplayable. But the developers didn’t just spot the landscape with randomly generated monsters. No, you can see them before you even get there. The aptly named ‘demon’ flies on the horizon while you survey the landscape. You can use your binoculars to plot your route before you start heading to your next objective–handy if you’re having to skirt by a shoreline that might be dotted with shrimp. And human enemies shoot the shit with one another while keeping lookout in a shack or building.

Instead of having beasts render when they’re only five feet in front of you (I’m looking at you, Fallout 76), Exodus is a living, breathing world filled with unique monsters that can be seen (in-game) miles away. It feels real. It feels alive. It feels good.

4) You can sleep to change the time of day.

For a while now, many RPGs have been adding ‘wait’ functions into their games, allowing players to fast forward until conditions are more favorable for exploration or attacking enemies. Until now, the Metro series hasn’t needed such a function since it was a linear, story-based game. But since Exodus has a day/night cycle paired with side quests and a gigantic map, developers have added in a camp system of sorts. Although not a big deal at first, it makes a huge difference when trying to avoid monsters, attack bases, and make your way around the map.

Metro Exodus is a big game, a huge game by FPS standards. It’s done so many things differently than many other games before it that I really hope this is the way shooters will head in the future: while maintaining a linear story, they give you different ways to get from a to b. Granted I’m only about three hours in, and I’ve heard some…questionable things about the later parts of the game, but I’m so excited to see where they take this fantastic story.