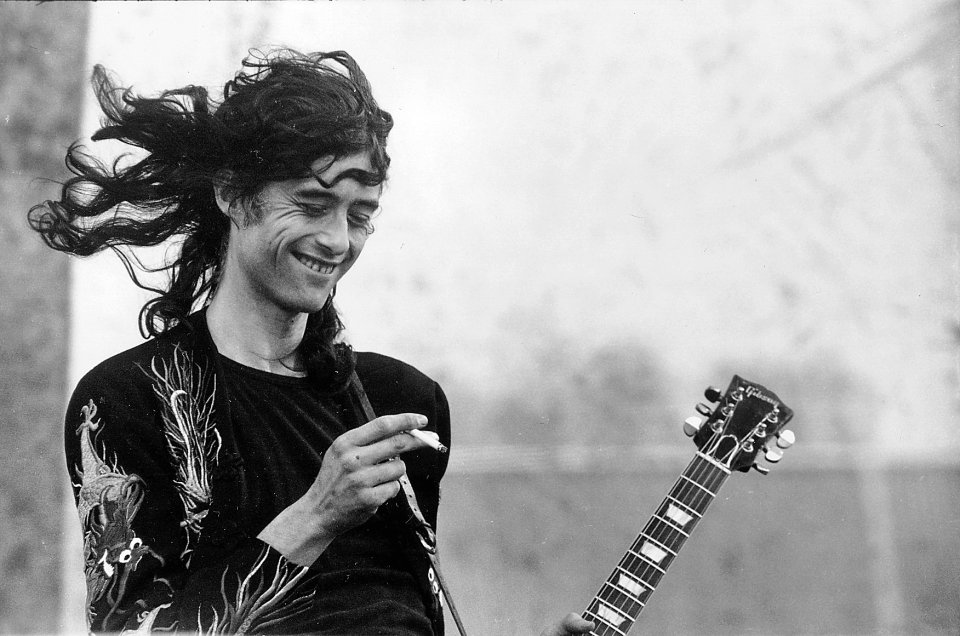 I’m going to undertake the gargantuan task of labeling the top three Zeppelin songs based solely on giutar. Why? Because it’s Jimmy Page’s birthday and I feel like it. It’s actually a lot easier than I thought, to be honest. When I first thought about doing this, I didn’t think I could pick just three. But after about two minutes of thinking, I had my list. Does that show you how fucking awesome these guitar parts are?

Which part? THE WHOLE THING. Every bit of this song keeps me on edge. The swirling, simple arpeggios that pop into stabbing chords. Granted, Bonham’s drums carry this song a lot, but the backing guitar that kind of just chugs along behind the lead chords pulls the song forward, leading the listener on a journey through the band’s attempt at tax evasion.

As I get older, I come to appreciate Zeppelin’s later days more and more. Regardless of Page’s drug use and the fact that his guitar playing suffered quite a bit, he still blows this solo out of the water, and really took their music in a completely new direction after Physical Graffiti. Achilles’ Last Stand perfectly embodies their change musically, and I don’t think there’s any other song after Zeppelin IV that deserves to be on this list more than this one.

(Couldn’t find both songs together, so here’s White Summer.)

There used to be this thing that happened in music where one song would seamlessly transition into another. Some bands still do it, but they’re not nearly as good at it as bands were in the old days. They would meld two songs together so perfectly together that you could hardly tell that they were separate entities. Sometimes entire albums would follow this formula, like Abbey Road or Dark Side of the Moon. My favorite example of this is Zeppelin’s Black Mountain Side/Communication Breakdown. They might be two separate songs in name, but you really can’t listen to one without the other.

Page is a master of open tuning, and Black Mountain Side is the first time listeners get to hear his mastery in action on a Zeppelin record. The first side of Zeppelin I is such a powerhouse, but when you flip it over and side two begins, you’re not even sure you’re listening to the same album. Your Time Is Gonna Come throws a wrench in the heavy drones that just occurred in Dazed and Confused, and then Black Mountain Side kicks in, taking that ‘chill’ vibe a step farther. It really lulls you into a false sense of security, making you think ‘Okay, the rest of the album is going to be more acoustic. Show us the other side of the band.’

But you couldn’t be more wrong. Right as you get relaxed, the pops of that Telecaster’s low E hit you like a ton of bricks. We just went from folk to punk in the blink of an eye, and it feels so right. This was one of the first Zeppelin songs I ever heard, and it changed the way I looked at music forever.

Guitars don’t have to be busting out chords all the time. They don’t have to be shredding arpeggios either. Sometimes all a guitar has to do is sing. And in the first two seconds of Since I’ve Been Lovin’ You, Jimmy Page’s guitar sings more than Robert Plant has in the entirety of his career. There’s so much emotion in those first five notes. A subtle time difference; a bend that makes your entire body turn with the note. It’s beautiful, and it’s the guitar part that made me fall in love with the blues.

It’s not Robert Johnson. It’s not BB King. It’s white boy blues, sure, but damn if you don’t feel something from this song, you’ve never felt the pain of someone you loved telling you they didn’t need you anymore. You’ve never felt the pain of working your ass off to get nothing in return, or the pain of losing your mind. And that’s what the blues is about. It doesn’t matter who’s playing it, who wrote it, or what they’re playing it on. It’s all about getting feelings out through notes on a fret board. And there isn’t a song that does that better than Since I’ve Been Lovin’ You.

Jimmy Page was my gateway drug. From him, I found Clapton, Johnson, Blind Lemon Jefferson, Muddy Waters, and a whole slew of blues musicians who showed me what playing guitar was really about. And I’ll never forget that first hit. The first time I heard those lonely five notes of Since I’ve Been Lovin’ You opened me up to a whole new world. Happy birthday, Jimmy. Cheers.