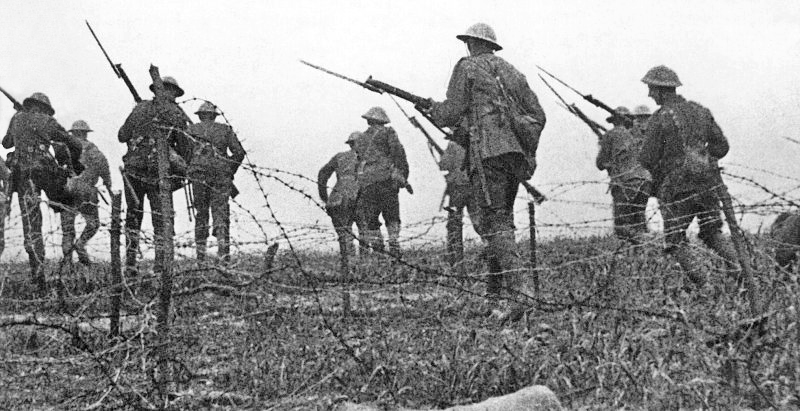 Today, April 6, 2017, marks the 100th anniversary of the US entering World War 1. I wanted to highlight this occasion with a few thoughts on the matter, as I really enjoy military history and think WW1 is something that more people should know about.

It’s amazing how war fosters creativity. It’s also sad how that creativity is used to take human life, but it’s creativity nonetheless. WW1 brought us tanks. Sure, they were silly looking (fig. 1), but they were ways for forces to cross through no man’s land, go over barbed wire, and not get shot in the head.

WW1 also gave us the machine gun. There were other permutations before, but WW1 saw the first use of the modern machine gun in warfare. It cost many lives, and will continue to do so for centuries. The Vickers MG (fig. 2) was used by British troops for the majority of the war. The jacket around the barrel is actually filled with water that would circulate through it, keeping the gun from overheating. It had the same firepower as 80 infantrymen, but was prone to jamming and overheating, even with the water-cooled barrel.

Probably some of the worst inventions to come out of WW1 are chemical weapons. The Germans first used chlorine gas in Ypres, Belgium in 1915. The effects were devastating. After the first gas attack, soldiers knew what to expect and were issued gas masks, but no one knew the first attack was coming. There were approximately 1,400 casualties. Many men lost their eyesight, suffered severe internal and external burns, and 70 died. In figure 3, you can see the variety of gas masks that were issued to soldiers throughout the war.

But for all the bad, there was some good that came out of WW1. Humanity learns from every major conflict, no matter the price, and the war itself actually helps in the long run. Before WW1, soldiers often wore ornate (and other times, not so ornate) hats or caps. These provided little to no protection against the terrors of the trenches. Falling bricks, debris, and bullets all caused numerous casualties throughout the beginning of the war. That is, until helmets were introduced. (Fig. 4)

But a weird thing happened when the British army introduced helmets to their troops: head injuries actually increased 800%. Why was this the case? Before helmets were introduced, head injuries were often fatal. These were then marked down as casualties, often not attributed to a head wound, but to a gunshot, shrapnel wound, or other blunt-force trauma. When the helmets were introduced, deaths lowered, but reports of head injuries increased because the soldiers wearing them were no longer dying, just being wounded. Pretty interesting, huh?

There were millions of soldiers that fought in WW1. Tens of millions. So many people died that the French actually had an extreme drop in birth rates after the war because a sizable portion of their male population died during the conflict. (This also explains why the French had such a difficult time in WW2, but I digress.) Sources disagree on how many casualties there actually were in WW1, numbers range from 5,000,000 to 20,000,000. But for all those who died, many great men (and some definitely not so great) came from the ranks of WW1 soldiers.

You might know Patton from the movie, but before he was a general in WW2, he was actually a tank commander in WW1. My apologies for the poor quality of this picture, but here’s the man himself standing with one of his tanks in 1917 (fig. 5).

When talking about Patton, you can’t not mention Bernard Montgomery (fig. 6). He was Patton’s chief rival in WW2, and thwarted and outsmarted Patton (depending on how you look at it) throughout the later stages of the war. Montgomery began his career in WW1 as a commander, and ended up serving throughout WW2. He was the chief architect of Operation Market Garden after the landing at Normandy. A brilliant man.

Yes, you know he would make his way in here eventually. Adolf Hitler, after dodging fighting in Austria in 1914 and moving to Berlin, eventually signed up as a soldier in 1916. He was wounded on several occasions and was even blinded during a mustard gas attack in 1918. I’ve heard that he actually cut his mustache so the gas mask would fit properly over his face (fig. 7), but haven’t been able to find solid evidence for this. The war gave his life purpose, or so he said, and that purpose followed him all the way to his death in 1945.

It’s a pity to put this man on a list with names like Patton and Montgomery, but I feel like it’s a necessary addition. Many men fought in WW1, and those experiences shaped them for the rest of their lives. WW1 also shaped the world, metaphorically and physically, and will continue to do so for centuries to come.

Many stories came out of WW1. Some of them true, some of them fake (I’m sure), or are not supported by evidence, but they’re stories all the same. I’ll share two with you here, one of which I know to be true, the other to be a little tidbit that I heard in a military history class I took some time ago.

In the winter of 1914, the trenches were stopped close to where they would be in 1918. The fighting was brutal as ever, and the shelling took many lives from both sides. But, on Christmas day, the British, German, and French soldiers didn’t want to fight anymore. They actually stopped, for one brief moment, and came together to celebrate Christmas. (Fig. 8.)

In figure 8, you can see a German soldier lighting a cigarette for a British troop during what’s known as the ‘Christmas Truce.’ This is a beautiful moment, one which still makes me choke up. Even in times of hatred and war, humans can come together and just be humans. It’s a beautiful sign of solidarity. Of course, once the higher ups found out about this little agreement, it was quickly dismissed and the troops returned to their fighting positions. I guess that goes to show you how differently infantrymen and officers look at war. One group sees it as violence between humans, the other sees it as violence between pieces on a chess board.

The other little tidbit I’d like to share is much more gruesome. Like I said, I heard this in passing and don’t know if it’s true or not, but I really wouldn’t doubt it. It really puts the loss of life into perspective.

There were over 1,000,000 casualties at the battle of the Somme, one of the deadliest battle in human history. The fighting lasted 141 days, and some rather interesting people fought there: Anne Frank’s father Otto, Adolf Hitler, J.R.R. Tolkien, just to name a few. But I digress.

More than 300,000 people died at the Somme in those 141 days. And, once the fighting came to a close and farmers returned to their fields, they had exponential increases in crop production for decades after the battle. If you need help putting 2 and 2 together, they had record crop growth because of the amount of human bodies that fertilized the land after those 141 days. True, it would have taken some time for the land to come back and for the shell marks to be plowed over, but still. This information really puts it into perspective for me.

War isn’t cool. It’s not neat. It’s history – history we are doomed to repeat if we continue down the same, hateful path that humanity has been on for so long.

There are many things we should remember about war: why it was fought, the men and women who served during conflict, the sheer loss of human life, and the technological advances that it brings about. But the one thing that we should always remember, is that war is hell. No other conflict illustrates that point more than WW1, the first war of modern human history. This war, much like every other, was fought for stupid reasons, and could’ve easily been avoided. So learn about it, honor the men and women who helped get us where we are today, and remember that war is hell.