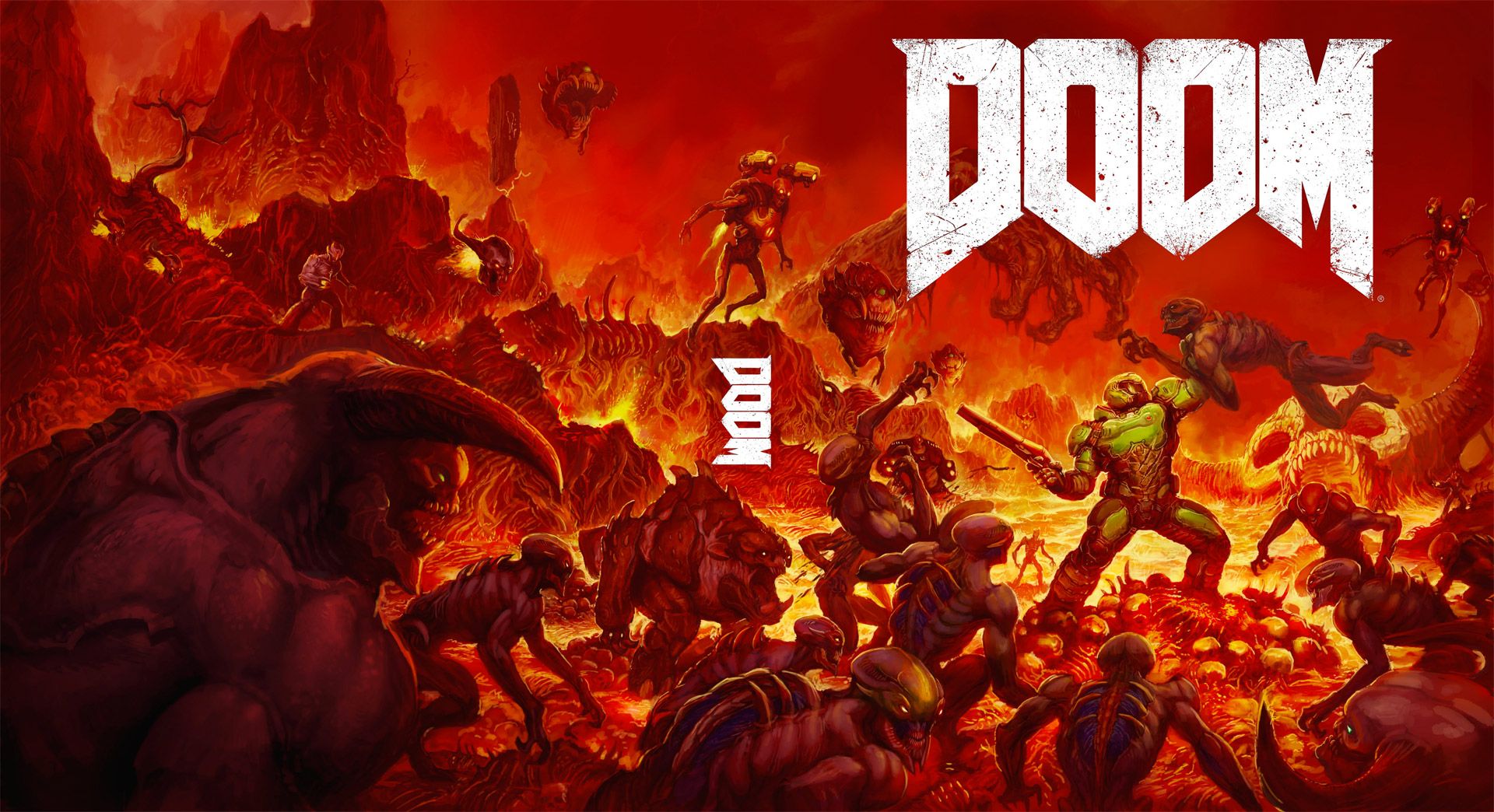 Everyone remembers their first video game. For some, it was Sonic on the Genesis. For others, it was Super Mario Brothers. But for me, it was Quake. If you’re not familiar with Quake – the 1996 version, that is – here’s a quick little taste of what you missed.

I do realize that this probably wasn’t the best choice of video game for a five-year-old to play. But I turned out fine. I always love it when people blame violent video games for violent people. I might have a quick temper sometimes, but this game affected me in no way at all. Well, except for the fact that I grew up loving to play shooters.

So, when I found out that id Software, the company that made the very first video game I ever played (as well as the second – see Doom (1993)), was creating a new installment in their Doom series, I was ecstatic. I didn’t pick it up when it first came out, though, mostly because I don’t really care for buying new games. Case in point – when I bought Battlefield 1 in December and felt like trading it in after a week. But I digress.

I played through Witcher 3 last year (still haven’t beaten it), played through my old staples (New Vegas, Red Dead Redemption), and then came Christmas. I opened up the little rectangular package, and sure enough, there was Doom. I was beyond excited, and when I got home, popped it in for a quick play. Well, quick after the 4 hours of updates I had to download. But oh God. It was so worth it.

Games have gotten away from their roots, I think. Gameplay used to be the core mechanic of every game you’d play. And sure, it still is to an extent, but most developers create games to awe their audience with graphics, story, or multiplayer. Not Doom.

Sure the graphics are absolutely amazing. Every bit of this game is beautiful. And yeah, the story is amazing, too. But you can actually tell that id took time to make sure that their game feels good when you’re playing it.

Movement in Doom is a constant – a necessity. It’s actually a core mechanic. You can’t stand in one spot too long or you’re sure to get blown into a thousand little pieces. id actually designed the levels to this effect. You move. You jump. You crouch. You shoot. Every movement is so fluid that, now that I’m toward the end of the campaign, I don’t even have to think about moving anymore. I see a ledge, I jump to it. I see a guy blinking blue and red, I tear its demon horns off and stab them into his eye.

That’s another part of gameplay that I absolutely love – the takedown system. Once an enemy is brought down to low enough health, they get stunned and start to flash blue and orange. If you get to them soon enough, click the right stick and watch them blow into a million pieces. Come at them from the front, you get one takedown. Come from behind, you get another. It’s a beautiful mechanic that flows so well into the constant, necessary movement of Doom.

The weapon and suit upgrade system also works really well. You could literally go the entire game without getting a single upgrade. Well, there are a few that you’re mandated to find so they can show you how the system works, but you get the idea. You’ve got to search for praetor tokens. You’ve got to kill every demon in a level if you want to get the 6 weapon upgrade points. Look around. Explore your environment. Doom isn’t like the other FPSs that feed you things as you complete levels or activities. They make you work for it.

Modern FPSs also have gotten away from the single player campaign. Nine times out of ten, the campaign is a secondary consideration, and online multiplayer always comes first. But not in Doom.

As an only child, I played games by myself. Even when video games first started going into the online multiplayer realm, I didn’t worry about it too much. I still had an awesome campaign I could play on my own, and everything else was just icing on the cake. But developers see single player campaigns as an add on now, like online multiplayer used to be. But in Doom‘s campaign, I’ve gotten to three points now where I’ve said to myself “This has to be the end,” but Doom just doesn’t quit.

The story is engaging, too. Everyone knows the basic story of Doom: humanity is mining on Mars, opens up a gate to hell, and you have to close it. Simple enough. But in its newest rendition, Doom brings you back in and makes you feel like you’re a part of something. It’s not just a point and shoot campaign that feels like the developers are throwing you a bone.

The most important thing about Doom is that it’s just plain fun. I’ve had more fun playing Doom than I have any other game in a long time.

Sure, the Fallout games are fun. But you have to think. There’s a lot of work that goes into playing RPGs, and even some other FPSs like Battlefield 1. But with Doom, I don’t have to worry about picking up every duct tape I find. I don’t have to think about sneaking into an enemy base and taking down the snipers silently. I can just sit back and kick some demon ass. And that’s really what it’s all about, isn’t it?

As much as I loved Doom, I did have a few minor problems with it. The wayfinding system is… It’s tricky. During the Foundry level, I spent a solid 10 minutes trying to find my next objective. It’s difficult to find where you’re supposed to go and how you’re supposed to get there. But it’s not like they didn’t try. It’s an understandable problem to have when they pack so much stuff into such a (relatively) tiny space.

Also, as much as I hate multiplayer in games, I really expected more out of Doom‘s. For the few short rounds I played, it felt a bit slow compared to the massive battles of the campaign. The levels are designed really well, though. They’re big enough to let you explore and have fun, but they’re small enough to have players from the enemy team around every corner.

But you know what? I’ll take these little minor issues any day in exchange for the crazy, insane fun that Doom offers. I might be a little late to the party, but I’m glad I finally got there.

Wayfinding can be tricky at times.

Multiplayer doesn’t feel as quick and fluid as campaign.

One thought on “Doom – A Review”