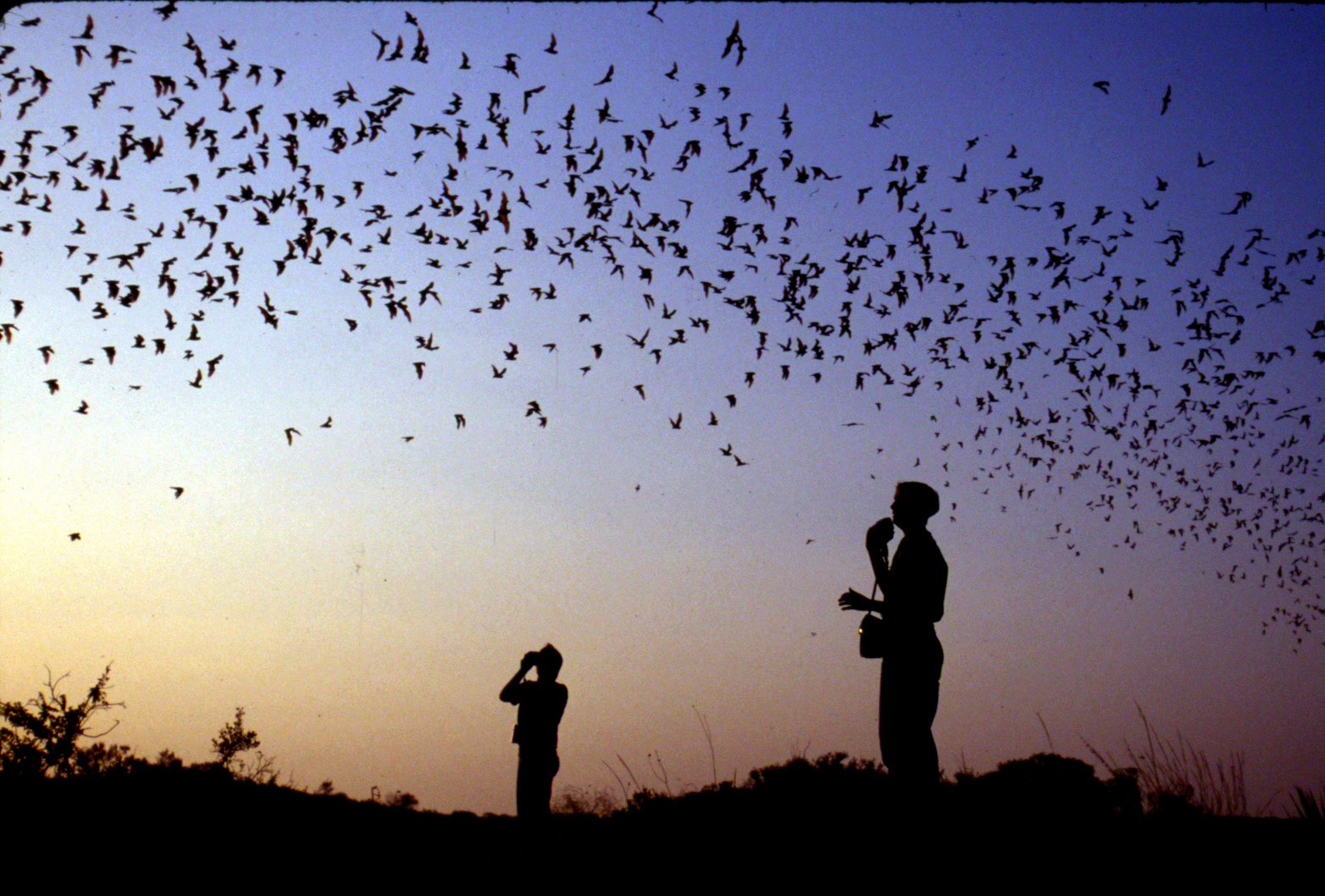 Bats are truly amazing creatures. Last night, my fiancée and I went to Bracken bat cave, the largest bat cave and collection of mammals on the planet. Over 20,000,000 Mexican Free-tailed Bats live inside this 600 feet long, 200 feet high cavern that opens up out into the Texas Hill Country.

If you’ve never seen a bat emergence, it’s an awe-inspiring experience. For 4 and a half hours, bats pour out of this cave. When 20,000,000 of anything fly out of a hole in the ground, they don’t just trickle out one by one, oh no. It’s a gravity-defying, black waterfall that pours out of a crack in the Earth’s surface.

First, one or two bats fly out. No big deal. Probably just the ones who didn’t get enough food the night before and are extra hungry. Next, you start to hear the wind from inside the cave. The millions of bat’s wings flapping and flipping all around create one hell of a storm. As the wind begins to come out and the pressure inside the cave begins to change, you can feel a slight breeze wash over your face (along with the strong smell of guano, decomposing bats, other dead animals, and ammonia).

Then, if you look closely at the entrance to the cave, you can see what looks like snow on a television. Little black blips flying around so fast that your vision is blurred, not so much that it’s completely obscured, but just enough to make you think there’s something in your eye.

Finally it begins. The torrent starts making its way up and up out of the cave entrance. It’s actually quite an interesting feat. You see, bats, as mammals, aren’t like birds. Their bones aren’t hollow, therefore it’s much more difficult for them to fly. When the bats emerge from the cave, they need to fly in a circular manner – which creates a vortex – in order to create enough lift to get them into the air.

As each bat flits around in this vortex, the wind grows stronger and stronger. It carries them into the air as they soar off into the distance to find their breakfast, lunch, and dinner. Here’s an amazing video of the bats exiting the cave – but this doesn’t compare to seeing it in person.

Speaking of breakfast, lunch, and dinner, did you know that we have these little guys to thank for a large amount of the food we eat on a daily basis, as well as the clothes we wear? The free-tailed bats are insectivores, which means, you guessed it, they eat insects. They do eat pretty much everything they can get their hands… er… wings on, but they mostly eat moths, the same moths that like to lay their eggs inside corn, cotton, and other crops. Pretty cool, huh?

As far as predators go, a lot of things feed on bats. Snakes love them; we’ve never witnessed it before, but at one cave that we’ve gone to, the guide said that they’ll actually drape themselves over the entrance to the cave and snap at the bats as they leave for the night.

Hawks are another predator of the free-tailed bat. Last night at Bracken, there were about three hawks that we could see, but the crowd was too loud for the hawks and they left after a short time. I’m assuming they just went a couple hundred feet away from the cave entrance and waited for their prey there.

And then there’s the great horned owl. As the emergence was just beginning last night, we saw a giant beast of a bird fly down into the mouth of the cave and perch itself on top of a large rock. We must’ve been a couple hundred feet away, but this bird was massive. It had a wingspan of at least four feet and just sat their waiting for its food. Amazing, beautiful stuff.

Snakes, hawks, owls, skunks, coyotes, raccoons, and hogs aside, there’s one threat to bats that’s worse than any other: white nose syndrome. White nose is a fungus that’s affecting bats all over the US, Europe, and Asia. The fungal growth latches onto the bats wings, muzzle, and body as they hibernate during winter, and wakes them repeatedly, causing the bats to burn up crucial fat reserves. This causes their metabolism to drop drastically, killing them.

Colonies that contract white nose have been seen to have a death rate upwards of 100%, meaning thousands of bats can be lost in one season. Colonies in the North-eastern United States, a region that has been hardest hit by white nose, have almost disappeared. Caves in Texas have a lower chance of carrying the disease as most of them act as stops during the bats’ migration south, but this hasn’t stopped the disease making its way into Oklahoma, Arkansas, and other southern states. Recently, white nose has made its way into the western US, which is an extremely scary thought for biologists and bat lovers.

The fungus can be transmitted by many agents: infected bats can contaminate entire colonies, and scientists believe that contaminated clothing can also cary the fungus. That’s why humans are being encouraged to steer clear of caves and other places that bats might hole up for the winter. Researchers are being instructed to decontaminate all clothing before entering caves and hibernation areas in order to minimize chances of transmitting the disease. Long story short: stay out of caves, for your safety and for that of the bats.

I know you might understand the severity of this disease, but let me reiterate: we have this animal to thank for a majority of the food we eat and the fibers we use. Farmers need bats. We need bats. Vast parts of the US are about to lose their populations of this amazing animal, and we’re in danger of having this disease spread all over the world. Not to mention they’re super adorable. Who can say no to this face? Granted it’s not a free-tailed, but c’mon. So cute.

What can you do to help? In all honesty, not much except for donate. Bat Conservation International is a great organization that’s helping fight white nose syndrome by donating money to research facilities all over the country. They also help preserve the wonderful caves and tunnels that these beautiful creatures call home.

You can click here to learn more about BCI, sign up, and donate. And trust me, find a bat cave near you. Even if you have to drive a couple hours, I guarantee you it’s worth it. A bat emergence is one of the most amazing things you’ll see in your lifetime. Nothing beats Bracken, though, and you have to be a BCI member to go. Hm… Pretty good incentive to join, isn’t it?

One thought on “Batty about Bats”